"Now, here, you see, it takes all the running you can do, to keep in the same place."
The Red Queen to Alice,Through the Looking-Glass, Lewis Carroll.

Have you ever heard of "The Red Queen Hypothesis"? It states that organisms must constantly adapt and evolve in order to simply survive. This theory has been applied to areas beyond biology - business, exercise, education to name a few. It also applies to dadshideout.com and other online communities. Remember "MySpace"? When you fail to adapt to the changing conditions, you don't just stop expanding, you actually shrink until you die. It seems no one can avoid the Red Queen - DHO is no different. Unless DHO adapts to changing conditions and evolves to be a better organization, DHO will follow in the steps of Myspace.

Changing of the Guard
In July of this year (2018), there was a huge change here at dadshideout.com. You may not have noticed it, but the custodianship of the website changed hands. With the changing of the guard came new views and new ideas. It also came with a realization. If dadshideout.com continued on its current course, the site would be dead in a year. So come along with “The Good, The Dad, and The Ugly” as we take a look at the past, the present and the future of DHO.

The current custodians are @thedakar and  @xJediDadx . They are the current Head Administrators for dadshideout.com and the DHO Discord Server. Previously, @Aftrthought051 and  @MagmaFlow were the lead administrators with @joey791 and @Pinmonkey001 being invaluable supporters of DHO with other administrative duties such as TeamSpeak. This team has been in place since the inception of DHO and had done a fantastic job of keeping DHO and open and welcome place for dads. Yet, 8 years after the doors of the current forum opened to its first members, the original admin team was feeling the pressure.  The passion was there, but the time to devote to DHO was, understandably, waning. Action was needed.

The call for volunteers went out in June of 2018. Who was willing to take the responsibility of keeping the "lights on"  and be the new Admins of DHO? The responsibility is a big one. Since October of 2010, there have been over 2300 dads that have joined the ranks of DHO. Tens of thousands of posts have been written in the forums. Dozens of clans have been created with “dadshideout” or “DHO” in their titles. DHO is more than a website - it is an entire online ecosystem. It goes far beyond a gaming clan; it is a place for dads to find advice, receive mentorship, and commiserate with other dads about being a dad.

With the bat signal lit, xjedidadx and thedakar threw their hats into the ring. The council of admin dads conferred - who would be the chosen ones? After much deliberation, it was decided that thedakar and xJediDadX were to be given the honor and privilege of being the new administrators. Shortly thereafter, the accounts were transferred, the passwords given, and the keys handed over. With that, DHO had two new Dads at the helm.

So there you go. All done, right?

Something Rotten in The State of Denmark
One of the first things thedakar did was play around with all the options on the forum and found the holy grail of number nerds - analytics software. Analytics is the computational analysis of data or statistics aka: math that tells you things. The good news is that the math came as pictures (graphs). The bad news is that the math pictures were not saying good things:

DHO Member Activity is Down:

The volume of posts is down:

Messages between Members is down:

New Membership is down: 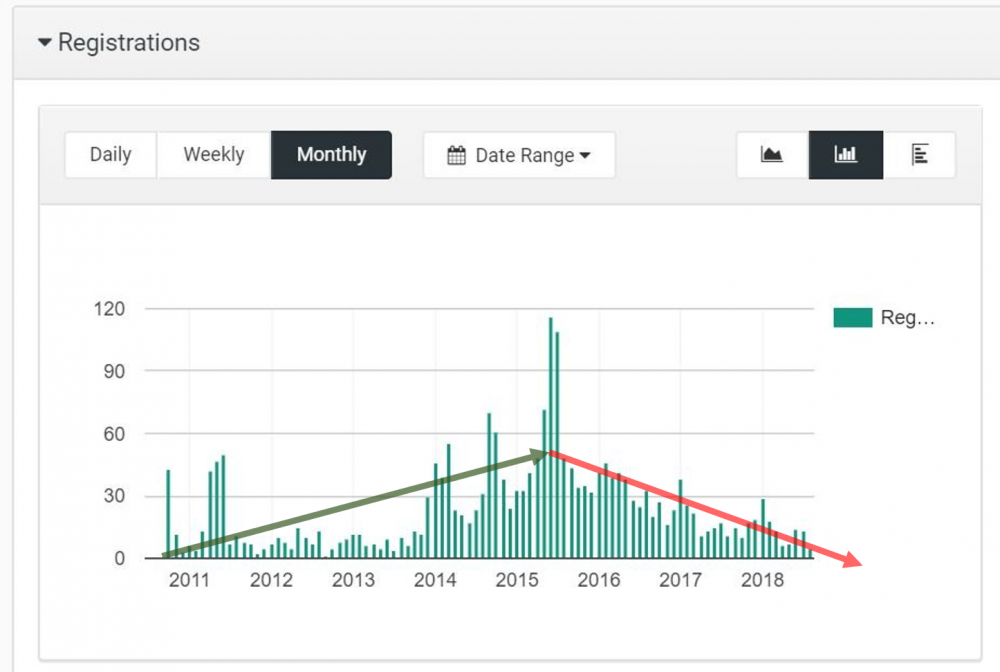 In short, DHO was dying.  DHO, by all metrics, has been shrinking from its peak in 2015, but the current trend was sobering. If the rate of decline continued, the site would be a ghost town within a year.  With no one around, there would be no reason to spend the money keeping the site open and the legacy of DHO would disappear. So the new admins declared that something had to be done and change was coming!

The old admins wished them luck and hoped for the best. The old admin team had tried to reverse the decline, so let's be clear that they are in no way to blame. Some of the long time DHO members shrugged their internet shoulders and said, “it has been tried before - good luck.” The reactions were rather lackluster - measured at best. The admins were volunteers, the decline had been happening for a long time, and what could be done on a non-existent budget, anyway? The odds seemed stacked against success.

The Council of Elrond
In August, thedakar put out the call to form a team of DHO members. Armed with his graphs showing the declining metrics, thedakar sought to get the experience and diversity needed to look at the problem, present solutions and debate the way ahead. The team would be made of long time DHO members, more recent dads, gamer dads, non-gamer dads, and dads of all ages. A dozen of dads raised their hands and offered to take part. The team was formed to tackle the problem. The idea was simple - figure out how to revitalize DHO. The answers were far more complicated.

This will be a multi-part series where we walk you through the DHO Revitalization discussion, the lessons learned AND ( most importantly ) look for your feedback on the way ahead!

Stay tuned to “The Good, The Dad, and The Ugly,” to learn more about DHO and its way ahead.