Here we go with the week 2 operations for Operation: Nightfall, season 1. Let’s just jump in.

1.)    Eliminate 16 players using any shotgun – must be done in public contracts. You must down the person with a shotgun, and as long as they are killed when you down them (doesn’t matter who finishes them off or how), you will get credit for the kill. The Toro shotgun is worth the purchase when going after this task, or simply choose the default CQB class to save currency. The default shotgun that is unlocked, the Richardson, is a pump action shotgun and unforgiving. Shotguns are easiest on the map Shoothouse, but you also have to be aware that a high number of players are also switching to shotguns for that map. On other maps, you want to set up an ambush in an obscure location. Try to position yourself away from the laptop, but not by an access point. Use cover and wait. Listen. On Docks, I was notorious for setting up on the perimeter and waiting. When someone was coming, I would inch closer to the edge of the conex box and shoot a contractor as soon as they round the corner. Many times they were just running right past me, eager to just get to the laptop. Same for Warehouse. Wait until you hear them engage with your teammates in the middle, and then flank. Get close. One shot, one kill is very easy.

2.)    Eliminate 8 players with headshots using any shotgun – must be done in public contracts. This task is much more difficult than it sounds. None of your shotgun pellets can hit the opponent’s chest. It must be a clean headshot which means you need to aim high. Think of that opponent as wearing a baseball hat. You want to aim right where that middle, top button would be, or just a wee bit higher. Sometimes, from aiming so high, you will not immediately down the person. Be ready to fire two quick shots and don’t assume it will be “one and done”. I had quite a few matches where I outflanked someone, they had no idea I was next to them. I was able to walk right up to them, basically stick my shotgun to the side of their dome and pull the trigger. Guess what? No headshot. I didn’t think I had to aim high that close. You do. This took me longer than any other challenge I think because of that. It is hard. You have to train yourself to shoot over the person’s head, and be ready to fire multiple shots because only some of the spread will hit them.

3.)    Fulfill 16 contracts – can be done in Terrorist Hunt solo or public contracts. Very easy to do either way. You must win the game either by hacking the laptop on offense, or successfully defending the laptop on defense.

4.)    Complete 4 contracts in Hanger – can be done in Terrorist Hunt solo or public contracts. The entire FZH community right now is sick and tired of playing Hanger. Whenever FCE puts out a new map, they make that map on heavy rotation. That means you will pretty much play this map every third match in public contracts, if not more. Of course you can do it solo if you don’t want to chance that when it does come around, your team loses. I would simply play the game and if this is the latest task you need to finish the operation, then switch to solo and finish it out.

5.)    Tap on 16 different doors – can be done on Terrorist Hunt solo or public matches. See my guide for the Free operation in week 1. Very easy.

Your reward for finishing this operation is the Richardson SG12 shotgun. It is a very good shotgun to have. Powerful, semi-auto, with a deep magazine. 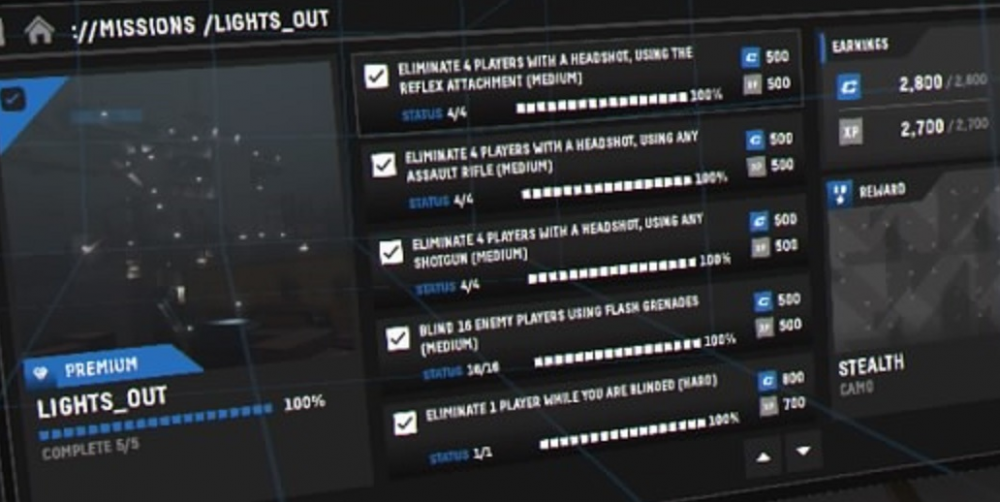 1.)    Eliminate 4 players with a headshot, using the reflex attachment – must be done in public contracts. The reflex site is affectionately known as “site 1”. You can use any weapon, and just must have this site attached. Again, just have to down the person. Does not matter who or how they are killed after that.

3.)    Eliminate 4 players with a headshot, using any shotgun – must be done in public contracts. See above in Free Operation – week 2, task 2, for tactics. You will automatically be able to work on this task, as well as the Free Operation simultaneously.

4.)    Blind 16 players using a flash grenade – must be done in public contracts. When you are able to effectively blind another player, you will actually get a “hit” sound. The same sound you get when a bullet connects with another player. This lets you know that you have blinded someone, but for this challenge, it lets you know that you have gotten closer to finishing your task.

5.)    Eliminate 1 player while you are blinded – must be done in public contracts. The great thing about this is that you can use your own flash bang. Find a moment when you see someone that doesn’t see you. Quickly throw the flashbang to where you are both blind and shoot blindly. You can also kill someone just as you are coming out of a flashbang blindness for it to count. This is what happened to me. I blinded myself with my own flash bang, and as soon as I could see, I rushed the room and was able to kill the other enemy. Even though the effects had basically worn off to where I could see, I was given credit. I am not complaining.

1.)    Fulfill 4 contracts while your entire team is still alive – must be done in public contracts. If you play this game enough, hopefully, you get this contract. By that, I mean hopefully you end up with a good enough team that no one dies. Statistically, you have to get this eventually. You should end up with good players at some point.

2.)    Revive 16 downed players – must be done in public contracts. Be a good teammate and revive your squad mates. If you have the revive pistol, it will be much easier. You can also do what Battlefield DHO dads have affectionately termed, “Magma someone”. This is when you revive someone without killing the person who downed them to begin with. As soon as the person is revived, they get shot right back now. Thankfully FZH limits your revives to two and you only have two bullets in the revive pistol (unless you use the character perk to have three), so this is limited. However, if you double revive someone in a match 8 times, you are done with this mission. Very easy.

3.)    Revive a downed player using the revive pistol (eight times) – you must complete this contract in public contracts. You unlock the revive pistol at level 26. The best way to shoot this is to aim your reticle or laser of your primary weapon on your down teammate, and then switch to the revive without moving your gun. If you shoot and did not move, your revive will hit exactly where your primary weapon was aimed.

4.)    Destroy 4 signal modifiers – can be done in Terrorist Hunt solo or in public contracts. The enemy in solo regularly places signal modifiers on defense, so this is very easy to get. Listen for the beeps as it will quickly get quieter once you take a step or two in the wrong direction. Look up, down, and behind objects in multiplayer. Players love to place these on top of items, in other rooms away from the PC and best of all on another floor completely.

For completing the bonus mission and having the season pass, you will get the Go-Nades trinket for all guns. I thought this was a dumb trinket I would never use, but I actually like it. It is big and obnoxious.