Now that I’ve laid out the meat and potatoes of the new features available in Operation Nightfall, let’s get to the main ingredients: the operations. One of the main reasons I have given this assignment to myself is because I could not find any information on the internet about how to go about completing these operations. No guides. No videos. No helpful tips. Therefore, I’m going to write up Aftr’s guide to the operations because no one else is doing it, and we are a very small community,,,,,,,so far.

3.)    Eliminate 8 players using any sidearm – this is a very hard operation. Sidearms are separate to equip so there can be no confusion in what weapon you need to use, or which are classified as sidearms unlike the assault rifles and SMG’s. So with that said, let’s go over strategy. I tried running around with just my pistol out and could not get a single kill. Even if you outflank someone and they don’t see you, they will have more than enough time to turn and kill you once you start to shoot (even with headshots). So what I suggest is that you have to be very disciplined to do this on your own. You must hit someone with a burst from your main gun, and then switch to your pistol and finish them off. YOU CAN NOT JUST SHOOT A DOWNED OPPONENT WITH A SIDEARM FOR THIS TO COUNT. You must down them with the pistol and they must be killed. If they are revived, and subsequently killed by a bullet or grenade, it will not count towards your task. If someone else kills them while they are downed, it will count. If you kill them with another gun or grenade, it will count. Shooting around corners is good. Fire on them, retreat back around the corner, switch to a sidearm, come out and finish them off. Higher level players will have access to higher damage sidearms like the DH 44 (level 30) or Thunder (level 50) which will greatly help. Make no mistake, this is not an easy task, and if you look at my screenshot, you will see that I used a hack key in order to bypass this one as well as number 4 because I could just not get it done.

4.)    Eliminate 4 players using the knife – if you click in the right thumbstick, look stick, or rear stick on the AIM controller, you will stab with your knife. Although it sounds difficult at first, it is much easier than your third task. The best strategy for completing this task is corners and flanking. Once you start to learn the maps from playing, you can start to hug the outside perimeter of the map. This will give you opportunities to out flank your opponents, especially if your team engages them in firefights. You have to be selective on this. This cannot be something you seek out every match. It just has to be something you are aware of that you need, and should the opportunity appear, you seize it. Going around the enemy, and then coming up behind them, you may find you get the chance to stab them. Hiding in rooms until you you’re your team engage in a firefight with the enemy and then see what direction they are shooting. You can sometimes pop out of a room and stab them. Listen. These players move like a herd of elephants running. You can hide in a room, wait for them to run by, jump out and stab them. Hide in a corner. On a big map with big rooms like Warehouse, Hanger or Containment, you can sometimes hide in a corner and watch them run right by. They are looking for movement, and particularly if you are far from any objective (access point or laptop), they won’t be searching for you. Wait for them to pass, then follow and stab. What is hard is resisting the urge to shoot them as you are pre-programmed to do. You will miss many opportunities at stabs for your overzealousness for a kill. You will miss kills from chasing after knife kills only to have them turn at the last second to see you and shoot. It happens to everyone. The knife is a bit finicky too. You have to be the correct distance, and sometimes it will take two stabs, so be ready. Don’t just stab once and assume he will be dead. Stab, and stab again. Kill the oxygen between the two of you because dead air is better than dead you. Practice on solo play if you must to gauge that distance correctly and see the mistakes you can make when attempting a knife kill.

For finishing the Free operation of week 1, you will be awarded the Nightfall trinket. Remember, everyone can earn this trinket. You do not have to own the season pass in order to unlock this cosmetic. 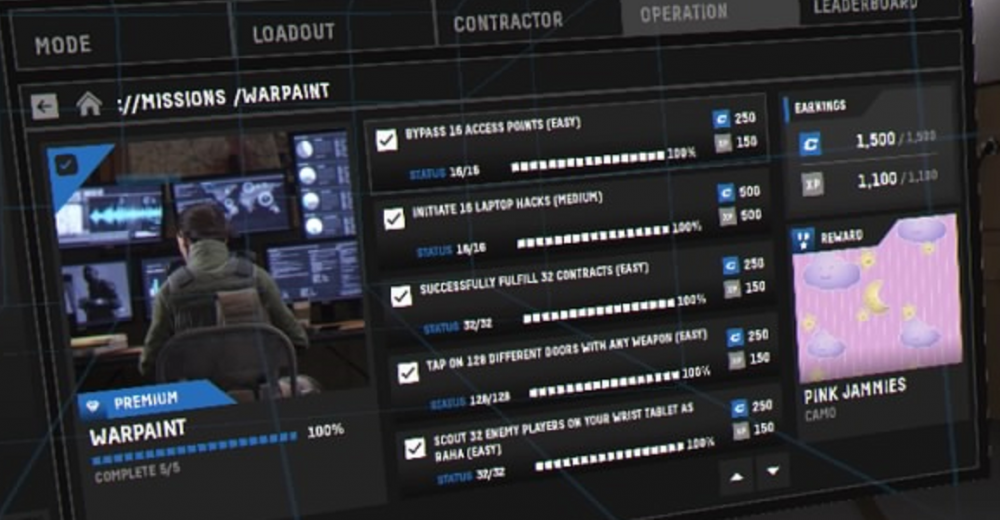 1.)    Bypass 16 access points – Access points are the first objective you must hit when attacking before you can unlock the laptop. These yellow diamonds show up on your map once you hit a certain checkpoint on the map. If you don’t go in the right direction, or are too far away, they will not show up. Be wary if you have traveled more than a minute and they are not revealed. This means you are heading in the wrong direction and are more likely to run into the enemy team around the laptop. You must be the one decrypt the access point. This task can be done in the Terrorist Hunt mode solo or public contracts match. It is easier to do this alone as you can guarantee you will be the one to decrypt it every match.

2.)    Initiate 16 laptop hacks – like the first task, this one can be completed in Terrorist Hunt solo or public contract matches. Again, you must be the one to initiate the laptop hack, not someone on your team. You do not have to be successful in your hack, just start it.

3.)    Successfully fulfill 32 contracts – once again, this can be done in Terrorist Hunt solo or in public contract matches. For this, you must win the round and complete the laptop hack. If you simply play multiplayer games, you will eventually complete this task. It is just a matter of playing the game enough times.

4.)    Tap on 128 different doors with any weapon – this just entails you bumping into a closed door, with your gun, which makes a “clang” sound and can alert the enemy to your presence/position. The key wording on this task is “different”. You cannot just run into the same door 128 times. It must be different doors each time. New matches are new doors, so if you want to replay Embassy 60 times, hitting the same 3 doors each time, you can do that. This can be completed in Terrorist Hunt solo, or in public matches. It is really just about remembering the task at hand and purposely bumping into doors each time.

5.)    Scout 32 enemy players on your wrist tablet as Raha – for this task, you must play public contracts and select Raha as your contractor. Raha’s permanent ability is to detect enemies better on the wrist tablet. For this, you simply must be close enough to enemy players for them to appear on your wrist tablet. Easily done, but it does take quite a few matches as you rarely catch all 4 of them on your tablet. Usually you can get 2 per match, so it will take around 16 matches to finish this task.

Once you complete both the free and premium operations, you will decrypt the bonus mission. Only once the operation is decrypted, will progress begin to be tracked towards completing your tasks. In other words, if you got any kills with the Omni face paint before having the bonus operation decrypted, they did not count. You may do these tasks for the bonus experience and crypto, but like the premium operation, you can only unlock the face paint for the completed operation once you have the Ops Pass purchased.

1.)    Eliminate 8 players while wearing the Omni face paint – pretty straight forward task. You must purchase the omni face paint for 1500 crypto and wear it as you eliminate other players in public contract mode. Be sure if you switch contractors while attempting this task, that you remember to equip this on the contractor you change to.

2.)    Eliminate 8 players while wearing the Kaolin face paint – same as the first task, just a different face paint. Again, you must purchase it for 1500 crypto, and remember to equip it as you kill enemy players. Must be done in public contracts mode.

3.)    Eliminate 16 players with headshots, using any assault rifle – refer to the first task of the free operation for which weapons are classified as assault rifles. You must kill with a headshot, so for this, aside from being sure to aim for the head (brought to you by Captain Obvious), you will have an easier time if you select a gun with a high accuracy like the Taylor CQB, K8, or G6. Pairing that with the iceman perk for your contractor which reduces weapon recoil will also help. If you hold down the trigger, remember that the spread of your bullets will open up, and you will find that many times the last bullet to hit your opponent that downs them will be the one that ended up in their chest. Once again, they must be downed with a headshot from an assault rifle and killed. They do not have to be killed while downed with an assault rifle for it to count, but they cannot be revived. If you down them with a headshot and then finish them off with a grenade, it will count. Many times I felt that I had downed an opponent with a headshot only to see that it did not count. When you down an opponent with a headshot, it makes a unique in-game sound as well to let you know you got a headshot. Listen for this, but it’s not completely necessary. Many times opponents are actually helping you when they are behind cover because the only thing you can shoot is their head. Thank you.

4.)    Eliminate 32 players using any assault rifle – no different than the first task of the free operation. See that task for which weapons classify as assault rifles. Must be completed in public contracts mode.

When you complete the bonus operation for week 1, you will unlock the glow face paint for all contractors.